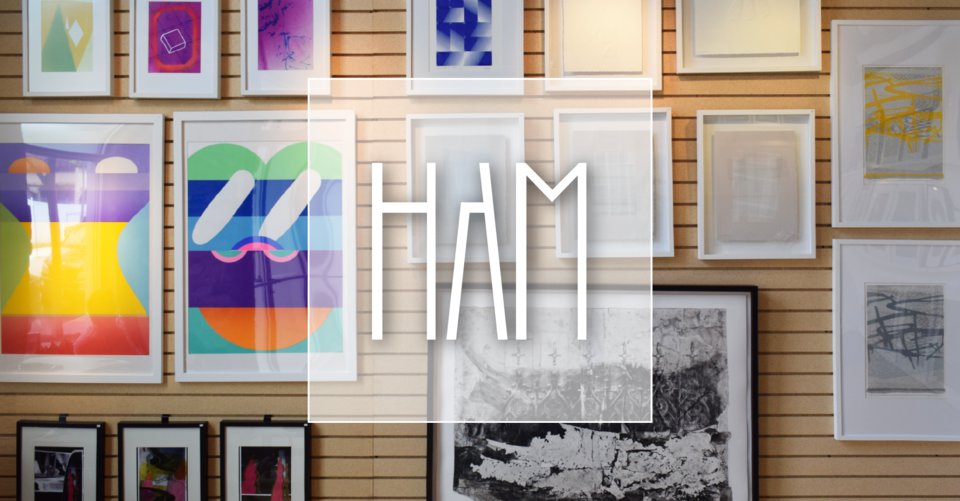 Mackenzie Madsen and Anna Sipkovsky are HAM, a brand new art space in Chicago’s meatpacking district that will get you to start your art collection. And they will make it fun. Built on a model of affordability and approachability, they showcase emerging and established artists—Alexander Valentine, Nora Ligorano and Marshall Reese, Richard Blackwell, Jan Tichy and Arianna Petrich, among others— through works on paper, limited edition prints, and designed objects. But they don’t stop there.

“Is there a blank space in your life that is in need of art?” they ask, before coming to the rescue with placement suggestions and design ideas determined to fit any kind of artwork in any kind of personal and domestic space—how to hang your art without screwing it up, how to determine the proper place for a newly purchased piece or what to acquire next according to your style and room configuration. HAM will take care of all your creative needs, from consulting to selling to displaying, filling your space and soul with art right when you need it. Here, Madsen talks to Rainbowed. about the growing creative entrepreneurial community in Chicago, why creating a network of “bad bitches” has an energy that keeps them alive, and how learning business through trial and error isn’t so bad after all —even though at times, you may hate yourself and others. Let’s talk about the name first. Where did HAM come from?
Mackenzie Madsen: #HAMsoHard It’s a combination of things. We’re located in the meatpacking district, it’s our initials, and we are going HAM on art. We wanted people to know up front that we are not taking ourselves too seriously—that art can be informal and fun while remaining high quality.

Tell us about the idea. How did you decide to start HAM?
Mackenzie Madsen: Both of us have varying degrees of involvement in the arts but could all agree on one thing: there is a gap in the Chicago market, especially for those who are in the beginning phase of art collecting. Sometimes galleries can feel intimidating—we wanted to create an environment where art is approachable.

What is your favorite aspect of two people working together? How do you find balance?
Mackenzie Madsen: Collectively, we bring a ton of random skills to the table having come from managing our own businesses individually. We share the same goals and surprisingly have similar tastes in art, but are very different in talent and personality. Because of this, our coverage can be incredibly magical in stressful times, as well as in penurious times.

What inspires and motivates you?
Mackenzie Madsen: Learning and exploring. There is not one person who knows it all, so being a master is not the ultimate goal. It’s finding connections in art and in people that bring awe and excitement. We have recently noticed that we are encircled by a network of bad bitches and have been feeding off that gritty and graceful energy.

Note to Self: Just fucking DO IT and keep going.
Tweet this

Chicago’s creative entrepreneurial community is constantly growing and changing. Where do you find your place in it?
Mackenzie Madsen: It’s a fun place to be at the moment. It’s ever changing and evolving. We have our set of current goals and they have evolved slightly over the past year, but we maintain the same values. As long as we are connecting people with art, we are thrilled.

What have been some of the biggest challenges you faced so far, and what have you learned from them?
Mackenzie Madsen: It’s been less than a year, so we are still painfully new. We struggle with learning things the hard way. It definitely takes a toll, but we are very aware of the gems of knowledge they have brought for the future.

What are you most proud of professionally, and why?
Mackenzie Madsen: The ability to remain open-minded. Allowing ourselves to be influenced by connections with others and not believing that there is one answer for anything.

Share a good piece of advice based on your own life experience for people who are trying to get their start.
Mackenzie Madsen: Just fuckng DO IT and keep going! You may hate yourself (and others) at times, but you will truly regret not giving yourself a shot.

Please, create a haiku best representing your life right now.
Mackenzie Madsen: It’s about the joy, of following a dark path, few dare to walk down. Plagiarized from google!

What do you find at the end of the rainbow?
Mackenzie Madsen: Do rainbows end? Can we not ride a rainbow wave forever? Do rainbows end? Can we not ride a rainbow wave forever?
Tweet this